My wife Marcy and I were running late for a show one Saturday evening . . .

As we excused ourselves in making way to our seats, I apologized to nearby patrons for being late as well as for the back of my head, quite bald and shiny, that was sweating so profusely. I was particularly concerned about the disturbing impact it was having on the young theatergoers seated behind us. In an effort to make amends, I promised their parents that after the show I’d work on creating a special cleansing wipe just for bald men who couldn’t tell time. As the curtain rose, I promised ‘this horror will never happen again’.

To this day I don’t remember what show we saw that night. What I do remember is that I became obsessed with the idea of creating not just a wipe, but an entire line of premium, high quality grooming products for men like me. What was being sold in drugstores wasn’t good enough and what was being sold in department stores was way too expensive. Manufacturers were ignoring the needs of us ‘regular guys’ and I was totally convinced we could create much better products ourselves . . . and so we did.

Why call the company BEE BALD® and what does the name have to do with our products? Don’t let the name fool you . . . honey and pollen extracts are packed into all of our products (“BEE”) and I’m bald (“BALD”). I wanted high quality, affordable products that were perfect for my face, but also my head. It seemed simple enough, yet no one out there was making them.

BEE BALD® became a consumer reality less than a year later when it launched online, and it didn’t take much longer for our products to find their way to retailers and web resellers throughout the country. So . . . now that you know a little bit more about us, shouldn’t you be putting your best head forward too? 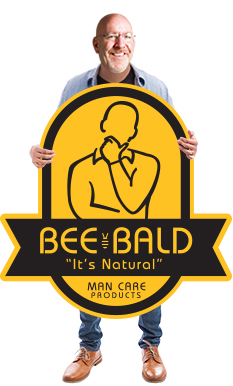